In India, cows are sacred as it is believed they are the incarnation of the many gods they have. Cows with extra limbs are supposed to give luck.So how does this happen?

Polymelia (from Greek poly meaning many or plus and melia which means limbs) or developmental duplication, is a recessive defect that causes the creature to develop extra limbs (most commonly, extra front legs). The extra limb is most commonly shrunken and/or deformed. There are many causes including an embryo that started as conjoined twins but one of them degenerated completely except for the extra limbs that end up attached to the other twin. It can also be a genetic mutation (spontaneous or inherited) that affects fetal development; or effect injuries, toxins and/or infections during fetal development. Calves affected by polymelia often die in utero. However, animals born with extra limbs can often live long, especially if the additional limbs are removed. Or not as it is the case with this one. One would inadvertently think it is giving birth if seen from behind.

Royal Gaitor Tumbas is located to the west of the road to Amber in a valley, in the city of Brahmpuri which is 15 km north from the pink city. It is a walled royal crematory popular for the gravestones of the Maharajas of Rajasthan. All the mausoleums of Jaipur’s royal family have delicate carvings that combine Islamic and Hindu temple architecture.
Each gravestone’s carvings reflect the taste of the respective Maharaja. The one for Sawai Jai Singh is considered the most impressive as it is made of white marble with intricate carvings on it.
Gaitor is the mispronunciation of ‘Gaye ka Thor’ which in Hindi is a phrase that means “resting place of the departed souls”.  In amongst the chaos of senses this is a tranquil place to reflect and relax. 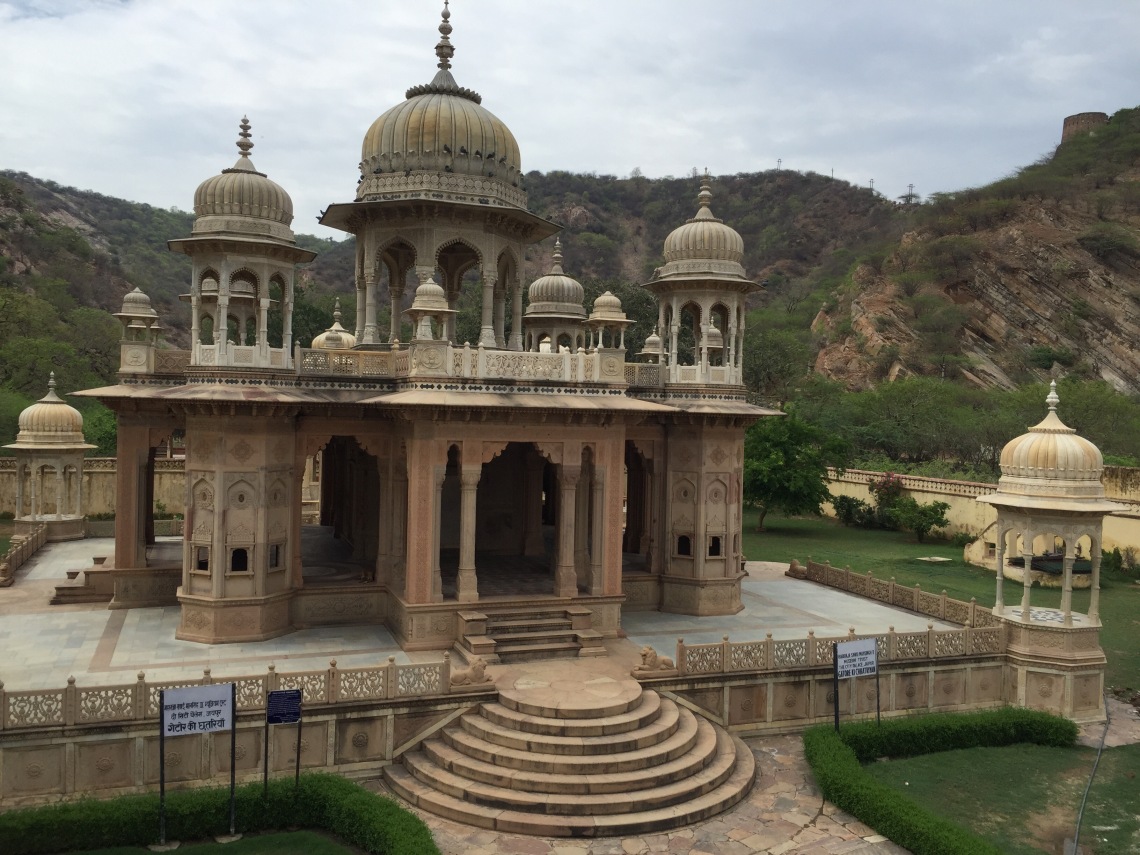 The opportunity to watch an indigenous sport in India that was originated 4,000 years ago is one in a lifetime. It is no surprise that having been played for so long in this country, India has won all Kabaddi world championships until today. There are two main formats of kabaddi: International rules kabaddi and circle-style kabaddi. What made the experience even more exciting was being an away supporter for Pune Paltan, in their victory against the home town team, the Jaipur Pink Panthers.

Received in Jaipur by a traditionally Indian car in the middle of a monsoon was definitely a good start to our mini holiday. The production of this unique car, the Ambassador, began in 1957 based on the old Morris Oxford Series III. Over 16% of the sales of roughly half a million Ambassador cars produced came from the Government as it had been the first choice for most politicians and bureaucrats. Top Gear crowned the Ambassador as the best taxi in 2013 but unfortunately the production of this car stopped in 2014. It is said that production of this classic has just been paused and not ceased. Time will tell.